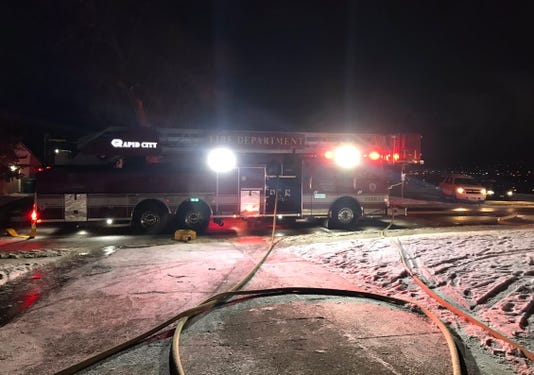 The suspected arsonist struck again, lighting a stack of boxes on fire inside an entryway to the West Park Apartments

Rapid City, SD – According to the police report, this incident occurred on Thursday morning, in an entryway to the West Park Apartments on 11th Street.

Among residents, there’s definitely a lot of uneasiness and concern and wondering who it could be. There’s a few of them that are very, very concerned in terms of the proximity of it, it’s becoming increasingly closer.”

The fire was small and extinguished by a sprinkler but is significant since it’s part of a string of suspected arsons that have occurred between Mount Rushmore Road and 11th Street over the past few months. This fire was reported shortly after 4 a.m., Jaeger said. Firefighters arrived to find that a stack of boxes inside an entryway from the alley had been set on fire. A single sprinkler went off and extinguished the small blaze before they arrived.

Part of the building was evacuated due to the alarm and smoke, and were let back inside once firefighters ventilated the building which had been filled with smoke. Tessa also mentioned that the fire department continues to investigate the suspect behind the arsons but said she can’t comment on their specific methods.

According to the Rapid City Fire Department officials, this fire must have been started by someone who lives in the building since he can tell that someone used their key card to swipe into the building. Surveillance footage doesn’t capture anyone lighting the fire but shows them leaving the building after it was lit. Police investigators are going to interview the suspect.