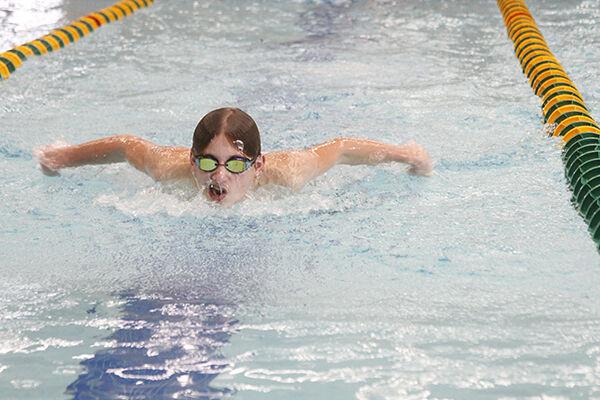 Black Hills Gold swim team members have competed in two meets this season while observing changes brought on by the COVID-19 pandemic.

The Spearfish-based team hosted the Black Hills Gold Pentathlon at the Sturgis Community Center, Nov. 21. A meet in Pierre opened the season.

While the Sturgis event was a normal meet, some differences were apparent.

Different age groups were at the pool at different times. That meant the number of swimmers in the pool at a given time was considerably lower than would usually be the case.

Spectators and parents were allowed to attend in Sturgis, with the deck being cleared every few heats.

“Obviously, everybody has to make decisions for their own family on what they’re comfortable with,” Hendricks said. “We are perfectly OK with swimmers telling us that they’re not doing meets right now because of concerns of COVID.”

Hendricks said it is her opinion, and swimming community consensus, that the activity is really safe in the current environment because of the pool chemicals. She compared it to other activities where participants are in running into one another.

“We do try to distance at practice by having fewer kids in each lane,” Hendricks said. Markers on the lane lines allow athletes to stop and start in different places, and practice sessions have only certain groups at a time.

Hendricks said Young Center personnel clean all touch points between different groups. Swim team members sanitize their equipment, such as kickboards, after each practice before they are stored.

Parents also have a self-screening checklist for their children.

Hendricks said she is viewing overall anxiety with the athletes. She said that is due to current life in general and not necessarily relate to swimming.

“We’re just trying to keep things as consistent as possible, as supportive as possible,” Hendricks said.