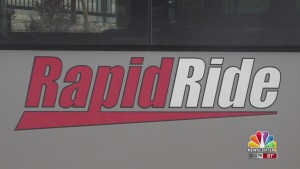 It’s been a week-and-a-half since Rapid Ride resumed downscaled operations, and everything appears to be running smoothly.

Rapid Transit resumed service on Monday, June 15 after a two-week shutdown which was caused by three drivers coming down with COVID-19.

Right now there’s no Saturday service and hours of operations have been cut back. Mayor Steve Allender says the city will reevaluate those hours after the July Fourth holiday.

Rapid City Mayor Steve Allender said “The goal is to return to a normal operating schedule as soon as humanly possible. That will require our staffing levels. Our staff to be healthy and ready and able to do that work.”

Rapid Transit will not be operating on July 3 or 4 in observance of Independence Day.