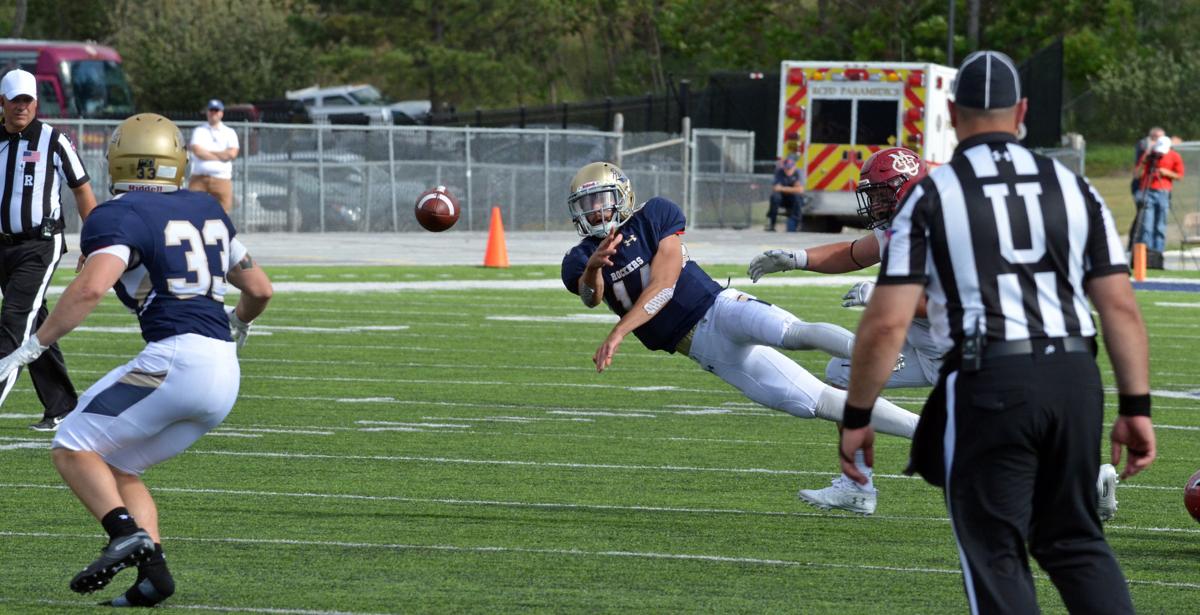 When identical twin bothers, Collin and Spencer Zur, first started playing football way back in the third grade, they were offensive linemen.

Fast forward to junior high, high school and now at the South Dakota School of Mines, the Zur brothers happily agree that they don’t belong in the trenches. But they still belong together on the football field.

Spencer is a sophomore quarterback for the Hardrockers and Collin is a senior wide receiver.

By the time they got to junior high, Spencer transitioned to quarterback and Collin settled in at receiver. They’ve been playing pitch-and-catch ever since.

“I really loved the opportunity to play with him at college,” Collin said as the Hardrockers prepare for Saturday’s home game against Chadron State College. “After high school we weren’t sure if that would happen, as we were making our decision separately. I’m really happy with the way that turned out, to be able to play with him, be around him as much as possible.”

Spencer has enjoyed being on the same team with someone that he grew up with as well.

“In college you are getting guys from all over the country to play. Having someone that you played with in high school, your brother, it is beneficial when you come here,” he said.

The Zurs aren’t the only brothers playing on the Hardrockers, as there are Jake and Josh Leone and Isaiah and Adrian Eastman, who are all not identical twins, but brothers.

Spencer committed to Mines about a month before Collin did.

“What really drew me here was the academics,” Collin said. “I really wanted to  do engineering coming out of high school, and I felt that this was the best possible university for me to do that.”

Spencer said they made individual decisions to come to Mines, never talking about going anywhere as a package, although they did come to Rapid City together for their visit in 2016. From that point they still interacted with the coaching staff on their own.

“We both looked at different schools to play ball at, but in terms of education, we both came to the conclusion that this was the right place to be,” Spencer said.

On the field together

While they both came to Mines at the same time, recruited by former head coach Zach Tinker’s staff, Spencer is just a sophomore in playing eligibility, having redshirted as a freshman and again last year with a medical. Collin is a senior (with the COVID eligibility to play again next season), never redshirting.

In his career, Collin has caught 48 passes for 708 yards and four touchdowns. This season he is second on the team in receptions with 12, for 179 yards and one TD.

Collin said he has been fortunate with the teammates that he has had around him coming in, like receiver Isaiah Manley and quarterback Jake Sullivan.

“They taught me a lot, especially when I was out there playing my freshman year,” he said. “It was a big adjustment right after high school into college. I was able to learn and watch some of the older players around me, learn how to play the game at a higher level. I think it helped me develop going into my junior and senior years.”

Spencer, who started last week in place of regular starter Jayden Johannsen, is 43-of-79 passing in his career for 582 yards and one touchdown.

Last week he led the Hardrockers to their first-ever win over Colorado Mesa, 24-9, where he was 16-of-23 passing for 178 yards.

“Spencer played very well last week,” Collin said. “We’re very happy with the performance our team put out on the field, and to come out with the victory.”

As Spencer came off the bench in the first two games this season, he said the preparation doesn’t change from week-to-week, as you prepare the same as a starter or a backup, especially in this age of the virus.

He said the mindset is you never know what can happen and you can only control what you can control. It’s trying to make the right decisions.

“You have to always be ready because you never know what can happen,” he said. “There is no guarantee. You take every week as a blessing and go with it.”

There’s no doubt their quarterback-receiver relationship has come in handy, although Collin said they don’t have anything telepathic on or off the field between them as identical twins. It comes from spending a lot of time together throwing and catching the football.

“When you work with a quarterback that long of a time, eight, nine years now, he knows where I am going to be on the routes and I know where he is going to put the ball for the most part,” Collin said.

Spencer said that in a new system you are trying to get a lot of reps in, so you know each one of your receivers is doing. He said it’s been nice to have a receiver he knows regardless of what they are running.

“Collin runs exceptional routes and I always know he will be there in the spots he needs to be,” he said. “Obviously with all of the other receivers, I have trust in them. But for him, I know how he is going to run his routes and where he is going to end up.”

So what happens when Spencer misses on a pass to his brother, or when Collin drops a pass from his brother? It was a typical household with brothers growing up, being competitive, but not now.

They’re not in junior high any more.

As they have grown older, Collin said it is better to discuss things off the field, look at the film and see what the defense is doing.