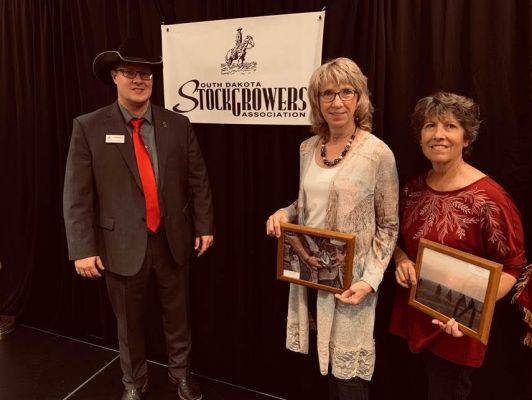 The South Dakota Stockgrowers Association wrapped up another successful convention and trade show in Rapid City, SD. Some of this year’s highlights included the membership electing leaders for the organization. Scott Edoff of Hermosa, SD was re-elected President at the annual membership meeting. “I’m humbled by the confidence of our members to allow me to continue in this position,” stated Edoff. “I look forward to continuing to serve the SDSGA. I’ve learned a lot in my first year as president and look forward to putting that experience to work for our members,” continued Edoff.

Vaughn Meyer of Reva, SD was also re-elected by the membership to serve as the Vice President of the Association. “Vaughn is an outspoken advocate of independent ranchers and property rights,” Said Edoff. We are happy he is willing to continue to help lead the Stockgrowers.”

Other new leaders were also selected by their respective districts. Former State Representative Steve Livermont was elected as Region 3 Vice President while Brian Fox and George Kenzy were elected to serve as directors from districts 2 and 14 respectively. “I look forward to working with these newly elected leaders,” said Executive Director James Halverson, “but I’d be remiss if I didn’t first thank those who are stepping down at this time. Liz May, Chance Davis, and Ty Littau have all been great advocates for our organization and our industry. I know they will all continue to be so in the future, and we thank them for their dedication and service” he added.

The two-day event was also full of presentations and panels of speakers from all areas of livestock production as well as some top policy makers making appearances. World renown professor and researcher Fred Provenza was one of the crowd favorites along with the expert panel discussions. “The panels that we were able to assemble shed some real light on several issues including property rights and wildlife management,” said President Edoff “I think folks really enjoyed hearing from all of our speakers,” he continued.

Halverson added, “I really appreciate the efforts of our elected officials to come and speak and attend our convention. A special thanks to Lt. Governor Rhoden and Secretary Roberts as well as the teams from our Senators’ and Congressman’s offices for participating this year.”

Grand Prize winners were  Candy Erk Manthey with her photo “If the Shoe Fits,” and runner-up Roxie Fox with “Sunrise Cowboys.”

“I want to thank everyone that participated this year,” said Executive Director James Halverson. “We had a ton of very great photos submitted. I hope to build on this next year and have an even bigger and better contest in 2021.”

“I really appreciate the SDSGA having this contest and highlighting rural South Dakota. From the pictures I saw at the convention, folks really captured what South Dakota and our industry are all about. This is a complex lifestyle and industry that many people just don’t know much about, and photography is one way we can bridge that gap and tell our story,” said Grand Prize Winner Candy Erk Manthey.

Other events such as the local pub crawl, the trade show, and the premier of NewsCenter 1 media group’s new series “Homegrown” were well-attended and obvious crowd favorites. “I think everybody had a great time at this convention. I also wanted to thank Ken and Janet with Wall Meats for providing the local beef for the events as well as all the rest of our partners and sponsors. We couldn’t do it without them,” added Edoff.